Wall  produced his first backlit phototransparencies in 1977. Many of these are staged and refer to the history of art and philosophical problems of representation – our collective need to visualise and have our past confirmed. He creates cinema-like tableaux – singular images with large production values, which employ actors and set designers, and are meticulously constructed over time, often combining multiple negatives. Their compositions often allude to artists like Delacroix, Delaroche, Goya, Diego Velázquez, Hokusai, and Édouard Manet, or to writers such as Franz Kafka, Yukio Mishima, and Ralph Ellison.

In her final book Regarding the Pain of Others (2003) Susan Sontag uses Wall’s Dead Troops Talk (1992) – a tableau created in the studio with the help of actors – to conclude her discussion on the effects, or rather the ineffectiveness, of images of pain, suffering and violence. She writes:
“Engulfed by the image, which is so accusatory, one could fantasize that
the soldiers might turn and talk to us. But no, no one is looking out of
the picture. There’s no threat of protest. They are not about to yell at us to
bring a halt to that abomination which is war. They haven’t come back
to life in order to stagger off to denounce the war-makers who sent them
to kill and be killed. And they are not represented as terrifying to others,
for among them (far left) sits a white-garbed Afghan scavenger, entirely
absorbed in going through somebody’s kit bag, of whom they take no
note, and entering the picture above them (top right) on the path winding
down the slope are two Afghans, perhaps soldiers themselves, who, it
would seem from the Kalashnikovs collected near their feet, have already
stripped the dead soldiers of their weapons. These dead are supremely
uninterested in the living: in those who took their lives; in witnesses – and
in us. Why should they seek our gaze? What would they have to say to
us? ‘We’ – this ‘we’ is everyone who has never experienced anything like
what they went through – don’t understand . We don’t get it. We truly
can’t imagine what it was like. We can’t imagine how dreadful, how
terrifying war is; and how normal it becomes. Can’t understand, can’t
imagine. That’s what every soldier, and every journalist and aid worker
and independent observer who has put in time under fire, and had the
luck to elude the death that struck down others nearby, stubbornly feels.
And they are right.”
(Sontag [2003] 2004, pp.112–13) quoted Alexander 2013 p??

I begin by not photographing

Wall has been a key figure in Vancouver’s art scene since the early-1970s. Early in his career, he helped define the Vancouver School and he has published essays on the work of his colleagues and fellow Vancouverites Rodney Graham, Ken Lum and Ian Wallace. His photographic tableaux often take Vancouver’s mixture of natural beauty, urban decay and postmodern and industrial featurelessness as their backdrop.

Presenting his first gallery exhibition in 1978 as an “installation” rather than as a photography show, Wall placed The Destroyed Room in the storefront window of the Nova Gallery, enclosing it in a plasterboard wall.
http://whitecube.com/channel/in_the_studio/jeff_wall_in_the_studio_part_ii/

Mimic (1982) typifies Wall’s cinematographic style. A 198 × 226 cm. colour transparency, it shows a white couple and an Asian man walking towards the camera. The sidewalk, flanked by parked cars and residential and light-industrial buildings, suggests a North American industrial suburb. The woman is wearing red shorts and a white top displaying her midriff; her bearded, unkempt boyfriend wears a denim vest. The Asian man is casual but well-dressed in comparison, in a collared shirt and slacks. As the couple overtake the man, the boyfriend makes an ambiguous but apparently obscene and racist gesture, holding his upraised middle finger close to the corner of his eye, “slanting” his eye in mockery of the Asian man’s eyes. The picture resembles a candid shot that captures the moment and its implicit social tensions, but is actually a recreation of an exchange witnessed by the artist. 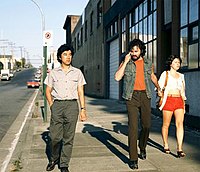 First shown at documenta 11, After “Invisible Man” by Ralph Ellison, the Preface (1999–2001) represents a well-known scene from Ellison’s classic novel. Wall’s version shows us the cellar room, “warm and full of light,” in which Ellison’s narrator lives, complete with its 1,369 lightbulbs.[10] 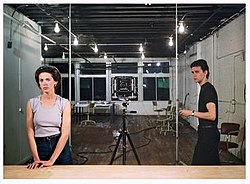 Picture for Women is a 142.5 × 204.5 cm cibachrome transparency mounted on a lightbox. Along with The Destroyed Room, Wall considers Picture for Women to be his first success in challenging photographic tradition. According to Tate Modern, this success allows Wall to reference “both popular culture (the illuminated signs of cinema and advertising hoardings) and the sense of scale he admires in classical painting. As three-dimensional objects, the lightboxes take on a sculptural presence, impacting on the viewer’s physical sense of orientation in relationship to the work.”

There are two figures in the scene, Wall himself, and a woman looking into the camera. In a profile of Wall in the The New Republic, art critic Jed Perl describes Picture for Women as Wall’s signature piece, “since it doubles as a portrait of the late-twentieth-century artist in his studio.”[12] Art historian David Campany calls Picture for Women an important early work for Wall as it establishes central themes and motifs found in much of his later work.[13]

A response to Manet’s Un bar aux Folies Bergère, the Tate Modern wall text for Picture of Women, from the 2005-2006 exhibition Jeff Wall Photographs 1978–2004, outlines the influence of Manet’s painting:

In Manet’s painting, a barmaid gazes out of frame, observed by a shadowy male figure. The whole scene appears to be reflected in the mirror behind the bar, creating a complex web of viewpoints. Wall borrows the internal structure of the painting, and motifs such as the light bulbs that give it spatial depth. The figures are similarly reflected in a mirror, and the woman has the absorbed gaze and posture of Manet’s barmaid, while the man is the artist himself. Though issues of the male gaze, particularly the power relationship between male artist and female model, and the viewer’s role as onlooker, are implicit in Manet’s painting, Wall updates the theme by positioning the camera at the centre of the work, so that it captures the act of making the image (the scene reflected in the mirror) and, at the same time, looks straight out at us.

Wall’s work advances an argument for the need for pictorial art. Some of Wall’s photographs are complicated productions involving cast, sets, crews and digital postproduction. They have been characterized as one-frame cinematic productions. Susan Sontag ended her last book, Regarding the Pain of Others (2003), with a long, laudatory discussion of one of them, Dead Troops Talk (A Vision After an Ambush of a Red Army Patrol near Moqor, Afghanistan, Winter 1986) (1992), calling Wall’s Goya-influenced depiction of a made-up event “exemplary in its thoughtfulness and power.” 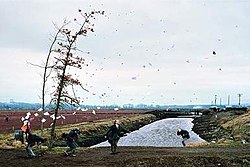 While Wall is known for large-scale photographs of contemporary everyday genre scenes populated with figures, in the early 1990s he became interested in still lifes. He distinguishes between:

“cinematographic” pictures, produced using a combination of actors, sets, and special effects, such as A Sudden Gust of Wind (after Hokusai), 1993. Based on Yejiri Station, Province of Suruga (ca. 1832) a woodprint by Katsushika Hokusai, A Sudden Gust of Wind recreates the depicted 19th-century Japanese scene in contemporary British Columbia, utilizing actors and took over a year to produce 100 photographs in order “to achieve a seamless montage that gives the illusion of capturing a real moment in time.”

Since the early 1990s, Wall has used digital technology to create montages of different individual negatives, blending them into what appears as a single unified photograph. His signature works are large transparencies mounted on light boxes; he says he conceived this format when he saw back-lit advertisements at bus stops during a trip between Spain and London. In 1995, Wall began making traditional silver gelatin black and white photographs, and these have become an increasingly significant part of his work.

Many of the boats are (intentionally for the tourists?) picturesque seaworn.

Aldeburgh is generally very crowded at weekends in summer.

Spring is a time when many people start to use the river again – seeing the ducks and feeding the swans. Walking after winter. On March 22nd 2015 I photographed all the litter left by this sudden burst of activity – like flowers suddenly in bloom.

I like the idea of a snail also using the space as its own place – it was still there a month later. Hybernating? But the image is not really sharp enough. I need to increase the focus depth.

I have better images of mist through the trees further up the river. But this shows some of the charm of the place.

Grassy Corner is a favourite place for watching the Cambridge University Bumps – a college rowing race that has taken place since 1827. This race was probably the first event to make this rural and otherwise unremarkable spot ‘a place’. Nowadays there are many local rowers and town boat clubs that also row past the bench.